A Review of A MAN WITHOUT BREATH by Philip Kerr 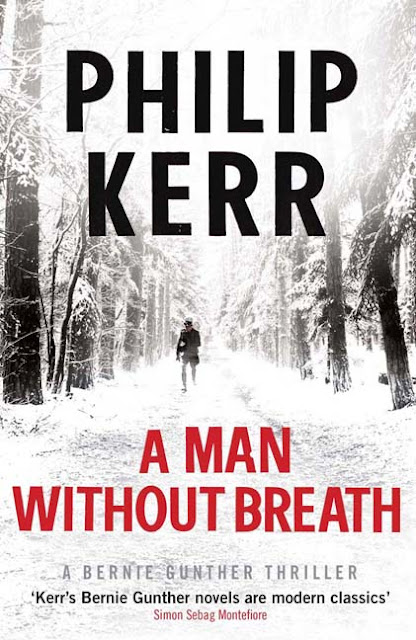 A new Bernie Gunther novel is always a noteworthy event for Berlin Noir fans and A MAN WITHOUT BREATH marks the first new release in the short lifespan of this blog. So without further ado, let's see how the ninth Gunther novel measures up.

The year is 1943 and the Nazis are trying to pick up the pieces after the surrender at Stalingrad. This devastating event sets the tone for the novel. Gunther novels have been cynical in the past, but A MAN WITHOUT BREATH takes it to new levels. And rightly so as, at the point the tale kicks off, only the most fanatical Nazi still believes Germany will somehow prevail and win the war. Fatalism has replaced optimism and Gunther has some company in his misery.

The novel opens with Gunther in Berlin, working for the Wehrmacht War Crimes Bureau and the irony of this entity should not be lost on the reader. Gunther has been working with a witness to a war crime involving the British Navy's sinking of a German hospital ship. The witness is a Jew but the Nazis are prepared to overlook that for the moment so long as good propaganda against their enemies will result from the investigation. It is while in this capacity that Gunther has his world yanked out from under him, literally. An RAF bomb strike on the building he's in collapses the structure around him and this is the metaphor for the entire novel. Germany has had the rug of Hitler's invincibility yanked out from under it with the recent defeat and Gunther's near-death in the rubble echoes this while foreshadowing what is coming for the country in the next couple of years.

Still reeling, Gunther is given the task of investigating a massacre of Polish officers by the Soviets in the Katyn forest near Smolensk. If true, the Nazis hope to have a strong propaganda tool to combat the Allies' claims of such atrocities being committed in the name of the German people. Given the task of handling the matter by Goebbels himself, Gunther reluctantly heads to Smolensk to continue the investigation.

That is the basic set up of the novel and the rest of the action plays out in and around the forest for the most part. As always, Kerr provides encyclopedic local details and the cast of characters he surrounds Gunther with are well-rounded characters. Even the monsters have shades to them. The plot twists and turns nicely as the investigation is soon complicated by multiple murders and as many suspects all while Gunther stumbles into the budding assassination attempts being plotted to remove Hitler. The suspects are many, the answer few as Gunther balances getting Goebbels want he wants while wrestling with the hopelessness and insanity of the situation where the mass grave the Soviets created through wholesale slaughter is probed while the nearby ones the SS themselves filled with murdered civilians are ignored - all while it's only a matter of time before the Russian counter-offensive drives the Germans out of the area for good and all. It's a rich tapestry Kerr gives us and combined with the engaging mysteries makes for riveting reading. 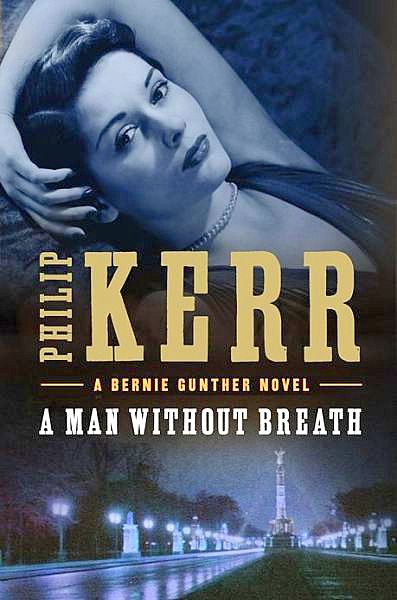 Threatened at every turn, Gunther must walk a razor's edge as he has done in his past work for the Nazis but this time he goes over that edge in a defining moment for the character that will forever change your perception of the man. His motivations for doing so should be a matter of great debate amongst Berlin Noir fans.

The novel is quick paced, interesting at every turn of the plot and steeped in period details. The result is one of the best entries into the series.

The sole misstep that slightly soured the reading experience is the romantic plot shoe-horned into the narrative. As a long-time hardboiled mystery fan/writer myself, I'm well aware that a romantic interest is one of the tropes of the genre. Gunther has had many in the past, usually with disastrous results, but they have fit the tales and their pre-war, war and post-war settings. But the romantic entanglement in BREATH comes across as too forced, present as a 'necessary' aspect of the genre rather than an integral part of the story. When the beautiful scientist showed up to exchange quips with Gunther before hopping into bed, I rolled my eyes and groaned. The rich plotlines of the novel were hampered by the prerequisite love interest this time out and I breathed a sigh of relief when this subplot was dispensed with.

This one aspect of A MAN WITHOUT BREATH should not deter Gunther or Berlin Noir fans from reading the novel. There is enough intrigue and moral complexity tinged with impending doom to satisfy any discerning reader of historical mystery. Kerr still leads the Berlin Noir field by a long margin and his strengths as a novelist and storyteller are showcased here. Sure to spur some debate amongst readers, A MAN WITHOUT BREATH will leave you breathless. Don't miss it.