A Review of Jonathan Rabb's SHADOW AND LIGHT 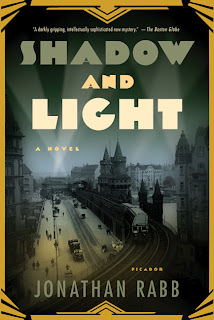 As Berlin Noir fans, and readers of this blog well know, there are many authors who have chosen to play in Philip Kerr's Berlin sandbox, but few do it as well as Jonathan Rabb. SHADOW AND LIGHT was my first Rabb novel and is the second (to date) featuring Kriminal-Oberkommissar Nikolai Hoffner. It will not be my last.

Not only does Rabb go a great job of making pre-Nazi Berlin spring to life around the reader in this tale of murder amidst the German film industry in 1927, but he also peoples the tale with fleshed-out characters. The sights and sounds are present but also, and, more importantly, the man-on-the-street feel of a people tainted by crime as a means to get by. Everyone has an angle, betrayal is to be expected. It's dog eat dog and the Nazi wolves are lurking in the shadows.

The story kicks off with a UFA executive found murdered in his bathtub. Hoffner has to walk a razor's edge between the studio suspects and organized crime when he has no choice but to go to a gangster familiar to him for help as things get too hot for him to handle. The trail soon leads to underground pornography, the rise of the Nazis, clashes between Brown Shirts and Communists, and the re-armament of Germany. 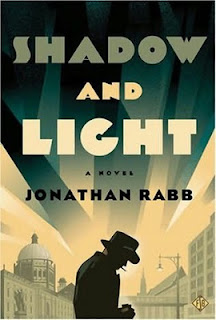 SHADOW AND LIGHT is a captivating read. It does everything it sets out to do and does it very well. Plots and sub-plots abound. The action is sparse but riveting. Hoffner, and his sons... well, this isn't an episode of My Three Sons and their relationship is painfully depicted, warts and all, as Hoffner tries to balance his personal and professional lives.

Jonathan Rabb is the best Berlin Noir author I've read since Philip Kerr got the ball rolling with MARCH VIOLETS back in 1989. His style is sparse and makes you pay attention. The novel gets a little bogged down at the outset with Hoffner's back story, which is slightly off-putting, but when the narrative kicks into high gear, the novel delivers.

Readers looking to give Rabb a try might want to start with ROSA - the first Hoffner novel set in Berlin in 1919. I'll be hunting up a copy of that one myself for a future Berlin Noir review. For now, though, I give SHADOW AND LIGHT my highest recommendation.

Next up at Berlin Noir will be SILESIAN STATION by David Downing followed by K. W. Jeter's ebook, THE KINGDOM OF SHADOWS, a Berlin noir novel that may have slipped beneath the radar of some readers. Until next time, keep reading!