A Review of Jeffery Deaver's GARDEN OF BEASTS 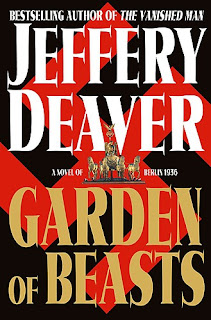 Jeffery Deaver had a long string of bestsellers under his belt before writing GARDEN OF BEASTS and snagged a Ian Felming Steel Dagger Award for his efforts. In the novel, Deaver utilizes what is rapidly becoming a Berlin Noir cliché, namely, the 1936 Olympics in Berlin as a backdrop.

Into this overused setting, mob hitman Paul Schumann is thrust. After being busted by the Feds, he's got a simple choice to make: go to jail or go to Berlin and assassinate Reinhard Ernst, the man spear-heading the re-armament of Germany. The US do not want to get caught up in another world war and figure that killing Ernst will prevent Germany from re-arming. I guess, sometimes, there really is only one man for the job. In exchange, Schumann will receive $10,000 and a clean record so that he can start again. Yes, the plot doesn't make a lot of sense but this is a thriller and, personally, I can overlook a paper-thin premise in favor of well-crafted action. 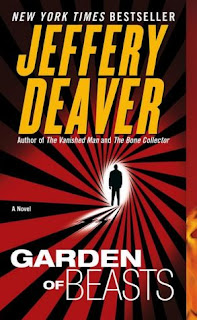 GARDEN OF BEASTS features a bit of both. Schumann is a schizophrenic character. Deaver describes him as a machine when it comes to planning his kills. He leaves no stone unturned and is meticulous to a fault. Once in Berlin, however, Schumann soon seems to be going out of his way to draw attention to himself by beating up Brownshirts in the street, falling in love, meeting famous historical figures, involving himself with the local criminal element and barely devoting any attention at all to Ernst until halfway through the book. He is an assassin who seems to love the spotlight. It isn't long before the Berlin police are on his tail while the Nazis have gotten wind that an operation is in the works involving a Russian (Schumann's cover) who is up to no good. 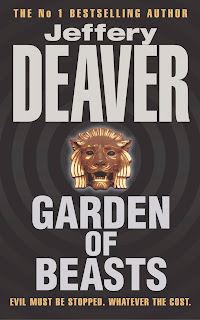 This odd plotting is soon complicated by Deaver's switching back and forth between far too many points of view. Beginning with Schumann's perspective, the narrative switches to Ernst's and we see him dodging the arrows flung at him by Goering as they vie for Hitler's attention. A study Ernst has headed up may or may not involve Jewish elements and Goering is trying to use this as a bludgeon. We also learn about Ernst's background, his family life and just about everything else you can think of. Deaver also introduces us into the life of a Holmes-like police inspektor Willi Kohl, his family life (a son with Hitler Youth problems), his work life and the people he butts heads with. Frankly, Kohl is the most interesting character in the novel as Schumann starts strong but soon becomes a mere device to move the plot forward. We are treated to a few other points of view as well. Göring gets to take center stage for a few sections as do some pacifist Berlin youths who at least pay off at the end of the novel. 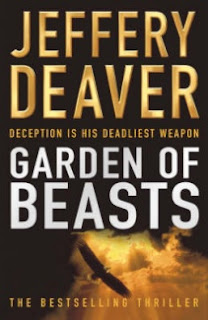 A minor aspect of the book I also found off-putting is Deaver's (or his editor's) choice of translating most of the German place names, streets and expressions. Nazis walk around saying "Hail Hitler", all of the streets and locales are given English translations - except the Tiergarten which is odd given the title of the novel. For this reader a lot of mystique is lost when characters meet up on Under the Lindens. Yes, the translations are accurate but I think most readers should be able to follow the narrative without these needless changes. And, for Berlin Noir or history fans, yeah, we know what the German means.

The early meandering of the narrative aside, once the book gets going, Deaver does an admirable job with the action. Famous for his twists, GARDEN OF BEASTS does not disappoint in that regard. The Schumann of the opening section returns with a vengeance in some great action. However at the climax of the novel, he once again reverts back to trying too hard to be a hero for the reader. The ending suggests a sequel and, considering the book's success. it wouldn't surprise me if Deaver gives us another Schumann adventure. 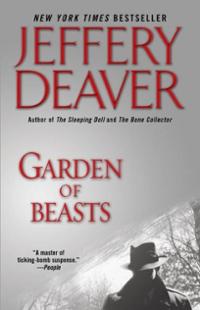 Deaver is a capable writer and his descriptions of Berlin, while accurate, fail to envelope the reader with that all-encompassing sense of place, which is so crucial to historical works. When he wants to, Deaver can really get you turning the pages. I can't help thinking that the novel would have benefitted from the cutting of 100 or so pages. There's enough here for a taut, roller-coaster ride but Deaver's need to flesh his characters out bogs the narrative down.

Given Deaver's experience and ability, GARDEN OF BEASTS is a somewhat satisfying read. It's no Berlin Noir classic but you could do a lot worse. Parts of the novel are absorbing and worth your time and the book does make a stab at providing the reader with some sense of place. If you're a fan of his work, then this book will not disappoint. If not, then GARDEN OF BEASTS is a crapshoot. There's quite a bit to like and about as much to dislike in the novel, which is why I give it a reserved recommendation.