A Review of Philip Kerr's THE ONE FROM THE OTHER 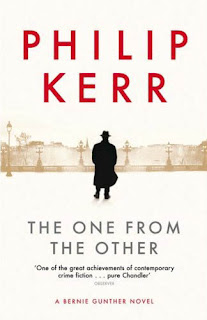 After finishing A GERMAN REQUIEM, author Philip Kerr took a break from Bernie Gunther to plough other literary pastures. That break lasted 15 years. Sure, the break today means nothing as all of the books are readily available, but, at the time, fans spent years wondering if we'd ever stalk through the filthy streets of Berlin with Gunther again. So when Gunther returned in THE ONE FROM THE OTHER, fans had high hopes and, more importantly, high expectations. I'm pleased to say that Bernie returned in style.

After a Prologue featuring Bernie Gunther's eventful trip to from Berlin to Palestine in 1937 where Gunther is embroiled in the wheeling and double-dealing around the exodus of Jews fleeing the Nazis, the novel jumps ahead to 1949 where we find Gunther in Munich. His wife has suffered a mental following the death of her father and Gunther finds himself trying to run a vacant hotel near the Dachau concentration camp. Needless to say, business is not good. 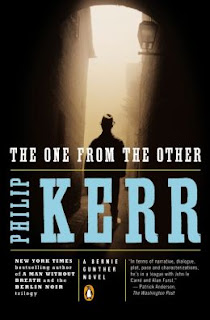 From here, a series of events begin that had me thinking, I will admit, that Gunther's fourth outing would be the first misstep in what had been, up until then, a stellar series. Following on the heels of the Palestine flashback, an American comes to the hotel with a hostage and forces him to unearth gold stolen from Jewish inmates of the camp. Then the situation with Bernie's wife comes to a head while he gets a case from a German woman hoping she has been widowed by the war so that she can re-marry and forget about the Nazi monster that was her first husband. From here, Bernie becomes embroiled in the Nazi underground railroad funneling wanted war criminals out of Germany to Argentina. Kerr hits us with so many plot threads that I found myself thinking that he'd made a few false starts over the 15 years between books 3 and 4 that he decided to just use all of the plots he'd come up with in a throw-everything-at-the-reader ploy to get Bernie back into action. 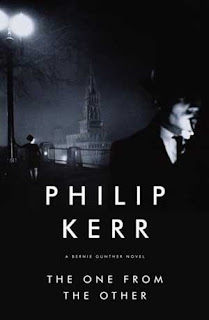 Man, was I wrong! THE ONE FROM THE OTHER hits its stride after Gunther is subjected to a cringe-inducing 'lesson' at the hands of skulking Nazi butchers though this is not evident at first. Recovering from his assault, Kerr gives Gunther yet another situation for the reader to absorb. This time, he is in a remote chalet where he is enlisted to secure the owner's inheritance. I should point out here that Kerr stoops to a creaking plot device to make this part of the story work. It is the novel's only misstep, but it is a doozy that could turn some readers off. This is fiction after all and one's suspension of disbelief should be operating at full power. That said, the twist does strain credibility.

However, once over that hump, Gunther is pummeled from all sides. The noose is tightening and it truly seems like there will be no way out for our hero. Watching Gunther squirm like a fish on a hook makes for some great reading as the bodies pile up as fast as the double crosses. He is a survivor and nowhere is that better displayed than in the ironic twist that characterizes the final pages of THE ONE FROM THE OTHER. 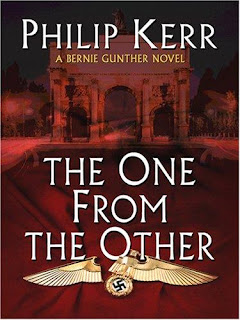 The novel, of course, features Kerr's unmatched eye for period detail and his ability to set each scene so vividly. The details are rich, precise, specific and prolific and yet, at no time, do they read like a Wikipedia entry. Kerr also demonstrates a singular knack for creating monsters that terrify us with their humanity. He gives us a glimpse into the Nazi mentality that few have managed over the years. Kerr has done his homework and it shows.

THE ONE FROM THE OTHER is one of the strongest entries in the series. However, it's not a good starting point for those new to Berlin Noir or the Gunther books. For the initiated though, it will get the job done. Do not miss it.

Next week we'll be breaking with tradition here at Berlin Noir. In the past, we've alternated between Gunther novel reviews and the books that have followed since the original trilogy. That format will return. However next week, I'll be reviewing A MAN WITHOUT BREATH since it has just been released and has Berlin Noir fans everywhere talking. See you next week.