A Review of Philip Kerr's THE PALE CRIMINAL 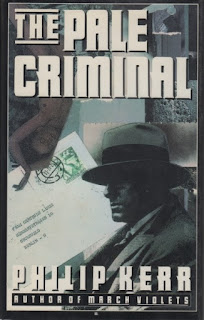 This week I'm taking a look at the second Bernie Gunther mystery, THE PALE CRIMINAL. This one picks up two years after MARCH VIOLETS. The year is 1938 and the time between the two novels has seen the Nazis tighten their stranglehold on Germany. Gunther continues with his P.I. practice, has taken on a partner and business is good.

The investigation into a blackmail scheme soon turns deadly but Gunther has bigger problems. The infamous Reinhard Heydrich makes his return and Gunther finds himself press-ganged back into the police force to help solve a string of grisly murders involving teenage girls. Gunther heads up the investigation (having apprehended a serial killer in the past) but this is not the Kripo he remembers. Five years into Hitler's rule, the police has been nazified to the point that solving crimes, by any means, is more important than uncovering the truth. Scapegoats are the norm and with anti-Semitism beginning to reach its fevered pitch in Germany, Jews are the most likely candidates. 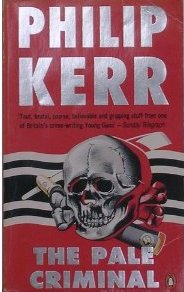 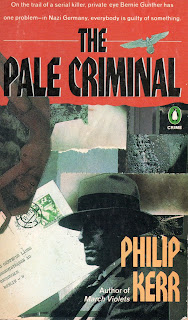 This is an intriguing set up and Kerr stocks the novel with period details that no other Berlin Noir author I've read to date can match. However it's the plot that left this reader flat. Involving psychoanalysis, seances and secret societies works tired clichés into what could have been a very good read. Gunther's clunky undercover scenes at the clinic are cringe-worthy as he goes from 'patient' to investigator in a heartbeat, taking a nurse in tow who doesn't bat an eyelash, and the investigation into the murdered girls is solved a little too quickly and easily so as to get to the showdown at the end. 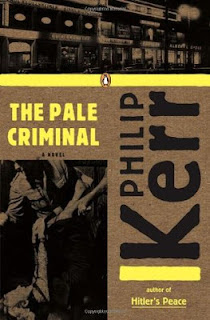 As mentioned above Kerr's period details are second to none and you WILL find yourself on the streets of 1930s Berlin as Kristallnacht and war approach. The fear, paranoia, resignation and cynicism are palpable and Kerr, through his characters, never misses an opportunity to demonstrate how pervasive Nazism has become in the daily life of Berliners while giving the reader a plethora of scene-setting street details. The result is as immersive as period fiction can be, helping to elevate a pedestrian story to captivating fiction. 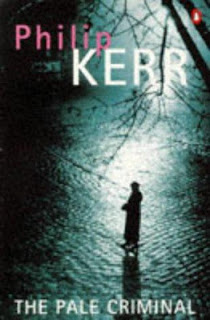 The tone of the novel, brutal and unflinching, fits the period and Gunther's start down his dark road reflects where the nation, and soon the world, is headed. Here Gunther is more Mike Hammer than Sam Spade. Desperate times call for desperate measures and Gunther is a product of his environment. The novel has been criticized for its treatment of homosexuality but this reader found the attitudes of the characters consistent with those of that time period and nothing ruins a historical story more than trying to graft today's sensibilities onto the past. 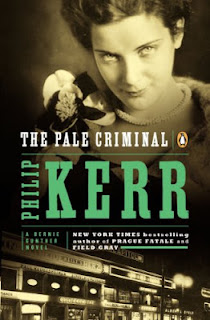 Overall, I found THE PALE CRIMINAL to be a weak entry into one of the finest series of historical mysteries ever written. The plot is bogged down by tropes, but the atmospheric details alone make the novel worth your time. A couple of notches down from the lofty heights Kerr has reached still make for compelling reading. That said, better Gunther adventures loom ahead when the series jumps to 1947 in A GERMAN REQUIEM.

Next up though will be Craig Nova's THE INFORMER. See you next week.
Posted by Unknown at 3:12 PM