A Review of David John's FLIGHT FROM BERLIN 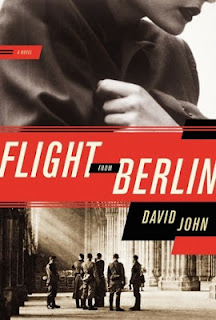 Sometimes  you have to get past a book's title to get at the heart of the tale. Flight From Berlin (Harper, 384pgs) by David John is such a book. The evocative title conjures images of racing through Berlin streets with Nazis on one's heels in a breakneck dash to freedom at the end of a nail-biting roller-coaster ride.

Well, that isn't this novel.

Given the city mentioned in the title, having the fist 60 or 70 pages of this short novel take place in the US and on board the ship carrying the Olympic team to Berlin is the first misstep in this mildly entertaining story. This setting is used so that the back story of the main characters - Eleanor Emerson, a rebellious female swimmer and cynical British journalist Richard Denham - can be introduced. This groundwork, in the hands of a more skilled writer, could have been handled within the context of the main plot and setting. Used in this way, the momentum garnered by the title is lost and it seems to take forever for the characters to actually reach Berlin.

Once they do arrive, the story begins to shine. Emerson has been kicked off the Olympic team for too much partying and has been recruited as a journalist where she meets and, of course, falls in love with Denham. Soon both are on the heels of important stories. The all too real treatment of Jewish athletes by the Nazis is well presented here but it is investigations the pair make along these lines that lead the novel's maguffin. No spoilers here but the search for this item puts the two intrepid reporters into the teeth of the Nazi machine at a time when the regime has put on its best face for the world in town for the games. This is the best part of the novel where the black heart of the Nazis is revealed through jarring scenes of torture, murder and intrigue.

History repeats itself, sadly, and the riveting intensity of the novel's middle section, like the lost impetus of the title, also falls by the wayside as Emerson and Denham head back to England for the next 100 pages of the story! Here the novel pulls a Hindenburg and becomes a struggle to finish. Not only does the change of venue and domestic bliss of the two main characters suck all the life out of the story, but when the tale picks up again with their making a deal with Heydrich for the maguffin, the tale begins to take ludicrous turns.

The deal is a simple one: they will trade the maguffin the Nazis are so desperate to get their hands on in exchange for the lives of a German-Jewish fencer and her family. A noble, selfless sacrifice, yes, but also, ultimately a questionable one as the maguffin could topple the entire Nazi regime! That aside, the deal is struck and then it's stupid time our heroes.

The first major gaff is Emerson's decision to head back to Berlin even though the Gestapo and the SD are after her. This plot point makes no sense whatsoever. She claims she doesn't trust the Nazis to keep their end of the bargain and that's a wise position to take even though, considering the circumstances, they probably would. After all what is the life a few Jews to them when compared with the damage the maguffin could do? What she hopes to accomplish upon her return to Berlin is not clear. Is she thinking that if she shows up, Heydrich will wilt under her evil eye and cave in? It's a stupid twist. But there's a dumber one ahead.

The exchange of maguffin for Jews is set for the border between Holland and Germany and will take place on the former's side of the border since Denham, at least, knows it's not a good idea to place oneself, willingly, into the hands of the Nazis. What follows is keystone cops stuff. The Nazi agents sent to make the exchange do not even bring the fencer or her family across the border. In fact, they are many miles away. Being the baddies they are, there plan is to come across the border, murder Denham and company and retrieve the maguffin. So what does Denham do when he tumbles to their plan? He drives across the border back into Germany!? This makes absolutely no sense as they are safe in Holland, and border guards are right there to help them at any time. Yet they feel compelled to slide through the checkpoint without saying a word about the murderous Nazis on their heels. It's at this point where the novel lost me. If John had simply shown the Nazis heavily bribing the border guards, then Denham's choice to go across would make some sense as they are in an isolated area with no help to turn to other than the guards. Instead they cross merely so the story can resolve itself back in Berlin.

The rest in predictable stuff. A few chases, close calls and then sweet freedom... aboard the Hindenburg. If you're wondering, at this point, what the ultimate fate of the earth-shattering maguffin will be, I think you can figure the rest of the story out.

Ultimately, Flight From Berlin is a middle of the road Berlin Noir entry. John is a first-time novelist and the book does manage to evoke the city and the period fairly well and the middle section is truly great stuff. As a whole, however, the book's many shortcomings overshadow it's high points. Flight From Berlin is not a must-read. But it is fair entertainment if you're looking for a few hours' worth of distraction.
Posted by Unknown at 12:38 PM