THIS IS BERLIN... NOIR 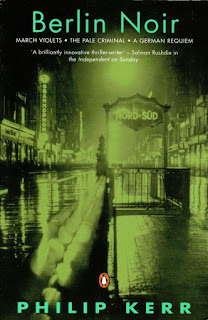 Welcome to the BERLIN NOIR blog. For those of you new to the genre, I'll begin with a few words of explanation. Berlin Noir was the name of an omnibus collection of Philip Kerr's original trilogy of novels featuring Berlin detective Bernie Gunther. The three novels: MARCH VIOLETS, THE PALE CRIMINAL and A GERMAN REQUIEM were all originally published separately to great acclaim but it was as a single, collected work that the novels really took off and gave the burgeoning genre it's name.


Since that release back in 1993, a host of other authors have prowled the tense streets of pre-war Berlin until, today, Berlin Noir has become a sub-genre of mystery fiction. Authors Jeffery Deaver, Jonathan Rabb, Rebecca Cantrell, David Downing, Joseph Kanon, David John and others have all added to Kerr's canon. And so has Kerr himself, penning six more Gunther mysteries to date.


Which is where I come in. I discovered Berlin Noir about eight years ago and was enthralled. Both pre-war and post-war Berlin has always been a fascination of mine and the same goes for hardboiled detective fiction in general. So you can see how Kerr's Gunther novels scratched  me right where I itched. I devoured the first three books and stepped away from the table wanting more. 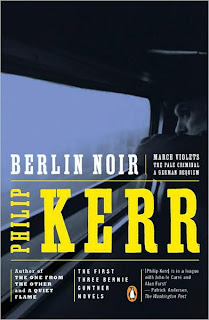 And the hunt was on.


Over the years, I've stumbled across the works of the authors above from time to time and was delighted when Kerr began a new series of Gunther stories in 2006. I've seen Berlin Noir grow to the point where HBO is currently in negotiations to bring the Gunther books to the small screen along the lines of the current, award-winning Game of Thrones adaptations.


Seeing Berlin Noir grow into its own genre gave me the idea of putting together a one-stop source for fans wanting to explore the various works published in the last few years. That's what this blog is all about. The plan here is to review all of the Berlin Noir novels to date. There haven't been many but there has been enough to make tracking them all down a bit of a chore for readers and fans. So I've done the work for you. 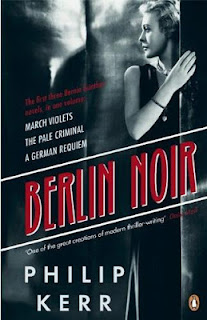 Every week I'll post a review of a Berlin Noir novel, starting next week with my review of Philip Kerr's MARCH VIOLETS -- the novel that started it all and introduced us to Bernie Gunther. I have a fairly comprehensive list of more than two dozen Berlin Noir novels I've found and welcome readers to send me titles I may have missed so that no contributors to the genre get left out. I also welcome and comments and suggestions you might have. This blog is for the fans!


Welcome aboard. I hope you'll enjoy the ride.
Posted by Unknown at 3:01 PM