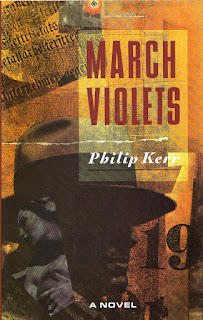 It's only fitting to kick off the reviews with the novel that started it all. Philip Kerr's March Violets (1989) not only introduced us to Bernhard 'Bernie' Gunther but also re-introduced an English audience to the Berlin of the 1930s, and, in the process, gave birth to the genre that has come to be known as Berlin Noir.

The novel opens with Gunther, a WWI vet and former police inspector now working as a private investigator, rattling about Berlin as the city prepares for the 1936 Olympics. Gunther is watching a group of brownshirts remove coin boxes with copies of a Nazi-backed anti-Semitic newspaper as the monsters controlling Berlin seek to sweep what is happening in Germany under the rug for the sake of foreigners from around the globe in town for the games. 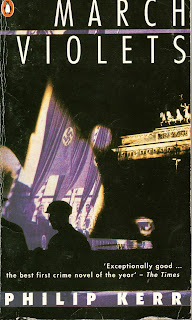 Right out of the gate, we are treated to Kerr's unmatched ability to immerse the reader in the daily life of this lost world. Telling the story in the first person is another component Kerr uses to make us experience 1930s Berlin, but it is his sharp eye for detail and intricate minute touches that transport us to the time and place where the Nazis are in the process of getting a stranglehold on German life. It is a city of fear, suspicion, betrayal and selfishness but it is also a city of great beauty where the citizens try to carry on while waiting for the axe to fall. Kerr's sets this mood extremely well and the reader finds him- or herself walking these paranoid streets of long ago.

Gunther's trade is the disappearance business. With so many people 'disappearing' daily into Gestapo cells or concentration camps, families and spouses are left ignorant of the fate of their loved ones and hire Gunther to see if he can learn anything about those who have gone missing. He soon has a new case, however, as a wealthy businessman hires Gunther to investigate the murder of his daughter and son-in-law during which a diamond necklace was stolen.

Gunther's investigation quickly leads him to Nazi conspiracies, murder, and the in-fighting between Goering and Himmler. Part Sam Spade, part Mike Hammer, Gunther is a world-weary, cynical protagonist who is not afraid to get his hands dirty. No knight in shining armor, Gunther takes the case at the outset because it pays well and has no desire to embroil himself with the Nazi government he hates. But it is that hate and a desire for the truth that leads him to risk his life to get at the real story. In the process he will come up against Heydrich in the first of what will be many run-ins and spend some time in Dachau for his efforts. 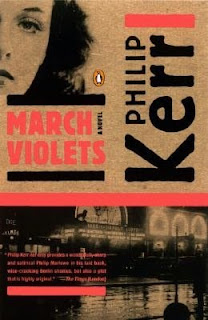 March Violets is an engaging read that pulls no punches. The novel's violence reflects a world where human life has no meaning and is unflinching in its depiction. Some may be put off by this, but this reader found the violence appropriate for the time. It seems logical that if Kerr has set out to show the black underbelly of the Nazi regime set against the facade of civility Berlin put on for the games, then today's readers need to see how precisely profound the hypocrisy ran in that turbulent time without the sugar-coating. Although graphic, the violence is not gratuitous, and that makes all the difference. 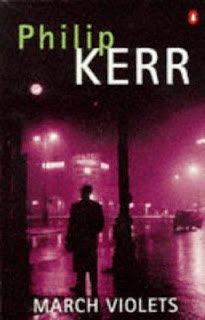 Another laudable aspect is Kerr's decision to make March Violets a German story. Many of the Berlin Noir novels that have followed on the heels of the original trilogy tend to tell their tales from a US or British perspective, an outsider's perspective, so as to spotlight the evils of the Nazi regime by showing it to us via fresh eyes. I believe this is also done to help sell the books to the US and British markets. There's nothing wrong with that, but Kerr's choice to tell his story through the eyes of Gunther allows the reader to experience the regime via an insider. And the case itself, murder and theft, has no ramifications for the world at large. March Violets tells a German story from the German perspective and leaves it at that. Given the works of various authors which followed, this is very refreshing for Berlin Noir readers. 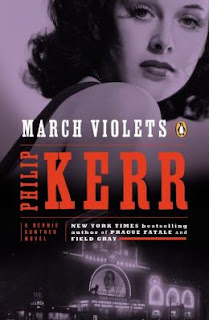 As for the novel itself, this was Kerr's first book and it suffers from some of the pitfalls of early work as to pace and with Kerr occasionally leaning a little too much on the tropes of the hardboiled tradition. As an enormous fan of Hammett, Chandler, Macdonald and Spillane (and many others), I have a profound affection for the hardboiled school, but Kerr, in March Violets, is reaching for something more literary in the book and what have become the clichés of the tough dick can be distracting at time in this setting.

That said, however, March Violets is a very good novel and an engaging read. Gunther is a character for the ages and Kerr's portrayal of the Berlin of that time is exemplary in its thoroughness. Although not my personal favorite Gunther or Berlin Noir novel, the book is well worth the reader's time. Berlin Noir could not have gotten off to a better start.

Next week, I'll be offering up a change of pace. Instead of reviewing the next Gunther adventure, The Pale Criminal, I'm going to jump ahead and tackle David John's Flight From Berlin. See you in seven.
Posted by Unknown at 3:51 PM