A Review of Craig Nova's THE INFORMER

THE INFORMER introduces us to a variety of colorful characters but the main thrust of the story deals with a prostitute name Gaelle and her pimp, a sixteen-year-old boy named Felix as they struggle to survive on the rough streets of Berlin in 1930. Communists and Nazis clash, there is fighting in the streets and the stage has been set for a clear political winner to emerge and take control of the country still recovering from the Treaty of Versailles and the depths of the 1920s economic woes. 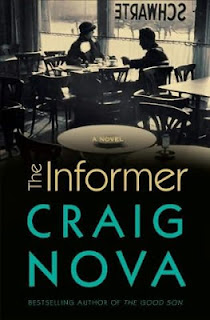 Gaelle is the daughter of a well-to-do family and was horribly burned in an automobile accident. Half of her face is scarred while the other half is unmarked and beautiful. However her scars have driven her from home where she is left to fend for herself on the streets. Her disfigurement has made her a sought-after prostitute as Berlin's sexual deviance is still in full swing.

As Gaelle plies her trade, she is also playing a dangerous game as an informer, collecting political secrets from customers which she sells to the warring political factions. She knows this will get her killed but dying is very much on her mind - as it is with most of the characters in the novel.

While this is going on, we meet Armina Treffen, a female police inspector for Inspectorate A at Kripo. She is investigating the serial murders of young women in and around the Tiergarten while her superiors and fellow inspectors are beginning to align themselves with the various political groups for their own protection.

This is the basic set up for Nova's morose novel. Although the tale is not rich in period detail, it does delve into the human condition as we watch Nova's broken cast of characters try to destroy themselves. Lost love, found love, longing, despair and desperation are the orders of the day here. Nova is an excellent writer and the characters leap off the page as fully rounded, though emotionally stunted, individuals.

Sadly, the strength of the novel is also its greatest weakness. Long sections are spent burrowing into the heads of these characters, so much so that it's easy to forget that there is a serial killer on the loose. We learn everything about them while women continue to be murdered, the noose is tightening around Gaelle's informing neck, and politics dominate the scene. A third of the way through the book, the focus shifts away from the plot and into the harried lives of the main characters and the balance is never restored. As good as the character moments are, they so swamp the novel that there is no room for the setting, the historical point of time or the plot to breathe.

The plot does come to a head ultimately, however, and in dramatic fashion. Then the novel jumps ahead 15 years to the Summer of 1945 for what is the best section of the novel. Treffen is living in the US, having been able to leave Germany because she was a police officer and considered a good German. Only her US benefactors want her to return to Berlin to help clear the streets of riff-raff while the citizens clear the streets of rubble. It is here that we get some great atmospheric details as Treffen tries to find her way through what is left of the city while navigating the labyrinth of the power struggle amongst the occupying armies.

THE INFORMER is a slow-moving, sometimes plodding read that presents interesting material in an uninteresting way. Yes, the writing is very strong, but the pace grinds to a complete standstill by the mid-point with the main characters wallowing in their faults and the short section in 1945 at the end, while good, cannot make up for what has come before. If you're in the mood for a deep novel on the human condition on a rainy Sunday afternoon, then this one will fit the bill. If you're looking for an edge-of-your-seat historical thriller, you'd best look elsewhere.
Posted by Unknown at 3:53 PM