A Review of THE  SLEEPWALKERS by Paul Grossman 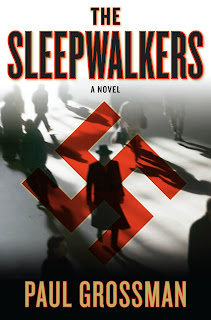 It's November, 1932 in Berlin. Germany, and the world, are about to start down a dark path to oblivion. The government is in turmoil, Communists and Nazis are in a tug of war for power and Germany holds its collective breath.

For Inspektor Willi Kraus, however, things are starting to pick up. Still grieving for the loss of his wife, Kraus is also beset by fame for being the man who collared a notorious serial killer. Balancing family life with his young boys and his moment in the sun as a household name, things couldn't be better and he is convinced that the dark cloud hovering over the city and the country will not darken his door.

Thing is, Willi Kraus is Jewish.

Spared the full brunt of anti-Semitism due to his notoriety, Kraus is not oblivious to what is going on in Berlin but holds on to the hope that the madness will be temporary since he, and so many others, are convinced that the Nazis will never seize power. Others know better and the exodus out of Germany is well underway. 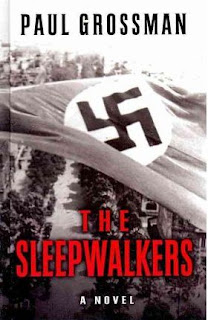 There's a new case to take his mind of his troubles. The dead body of a young girl is found washed up on the riverbank. Not too uncommon in Berlin but this girl has had grisly surgery performed on her. The lower bones in her legs have been removed, rotated, then grafted back on to the knees and ankles. A case only the famous Willi Kraus can solve.

The above breakdown is the stuff that Berlin Noir dreams are made of. An interesting character immersing himself in an intriguing police procedural against the backdrop of the last days of the Weimar Republic. What more can a Berlin Noir fan ask for?

Sadly, with THE SLEEPWALKERS, quite a bit.

The novel starts with a bang and Grossman's recreation of Berlin is second only to Philip Kerr's Gunther novels. Precise details, sights, sounds... the city springs to life in all its glory and all its misery and the details never slow the pace or otherwise bog down the narrative.

The problem I had with THE SLEEPWALKERS was the narrative itself. Kraus begins his investigation with a young protégé named Gunther (a wink to Mr. Kerr?) which leads to secrets the Nazis will do anything to hide. The political climate is getting worse by the minute and Kraus's friends and relatives are getting out while they can. Kraus himself sends his boys to Paris as the noose tightens. This is all compelling reading. Especially when Hindenburg himself saddles him a missing person's case and the disappearance of a visiting dignitary's wife is expected to take precedence over the dead girl. Or else.

But when Kraus meets a prostitute with a heart of gold in the course of his investigations, the novel's initial drive grinds to a dead stop. Part of this is understandable as Kraus has kept his emotions, and libido, in check since his wife died but the instantaneous love he feels for Paula soon has him mooning like a lovesick puppy to the point where he actually stops showing up for work to engage in some "sleeping in." This deflates the narrative drive. Grossman makes no secret that Kraus is being watched and is under the gun to bring his cases to a satisfactory conclusion and this diversion leads the reader to conclude that Kraus's professional standing can't be that big a deal after all. It certainly doesn't affect him. 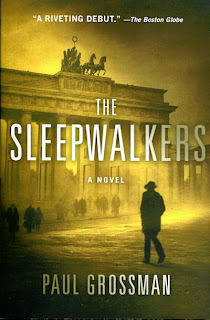 The story does pick up after this interlude however. Paula is used as bait to draw out the Nazis involved with the disappearance of both girls. Yes, the cases are connected under a pall of secrets and rooting them out is a task with disastrous consequences.

The novels also has an element that I felt drifted into the area of steampunk. A chunk of the plot concerns hypnosis used for nefarious means by a master hypnotist - ways that hypnosis simply cannot be used. Outside of pulp novels, that is. Seeing how much research Grossman put into his excellent depictions of Berlin, I assumed the same could be said about his delving into hypnosis. Which is why, at one point, I had to put the book down and google hypnosis to see if the clichés of a million thrillers were true over known fact. They aren't. I can only assume that Grossman, who admits in a note at the end of the novel that he performs some major time shifts with events and real people in the book, did the same with hypnosis, playing up the sensationalized fictional tropes against the real thing. This is a novel after all. Not a textbook. As the old saying goes: never let the facts get in the way of a good story.

Summing up, THE SLEEPWALKERS is not a bad novel. As a first novel, it's above par but suffers from the missteps typical of such efforts.  Grossman's Berlin descriptions are excellent, Willi Kraus is an interesting lead and offsetting a German hero being also Jewish at a turbulent time was a nice touch. The plot is interesting although the narrative fails to maintain its momentum. By tying the climax of the book with a real historical event, the impact of the outcome is lost on readers who know their Berlin history and can see where the story is going miles before it gets there. Grossman does show promise however and I, for one, would like to see if he sticks with Berlin Noir. He has for the moment as a prequel novel, CHILDREN OF WRATH, showing us how Willi Kraus got famous has been released. 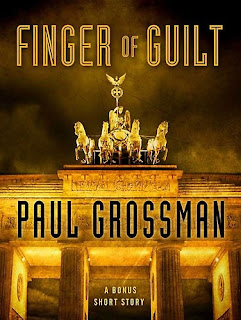 SIDE NOTE: a free KINDLE "story": FINGER OF GUILT is available for download. Claiming to be a short story, it reads as an excerpt from CHILDREN OF WRATH and is merely a vignette, not a short story at all. However it is free if you'd like to check out Grossman's writing style before diving into his two novels.
Posted by Unknown at 5:23 PM