SMOKE GETS IN YOUR EYES

A Review of Rebecca Cantrell's A TRACE OF SMOKE 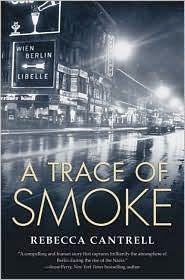 This is where the Vogel saga begins. The first of four (to date) Berlin Noir outings, A TRACE OF SMOKE introduces us to newspaper crime reporter Hannah Vogel. It is 1931 and Berlin is still the sin capital of Europe, every vice is readily available for those who have an appetite and Berliners are famished. Amidst political and social unrest, the Nazi shadow is just beginning to lengthen from beneath the Weimar Republic and it will engulf the city in a few short years. Vogel discovers her brother's picture amongst the unclaimed, unknown dead at the Alex. It is her brother - a cross-dressing, homosexual cabaret performer - and begins to quietly investigate his death.

What follows is not very compelling reading unless one is a fan of romance/relationship novels. Vogel soon finds herself looking after a young boy claiming to be her brother's son. She becomes romantically involved while looking after the child while investigating and everything becomes an uninteresting slog for this reader. Fans of chick-lit might have a better reading experience. I was willing to cut Cantrell some slack as this is her first novel, but the prose is just too flat and dull. Having read others in the series, there's not been much improvement in my opinion. All of the above could easily be better tolerated if the author had been able to create that sense of place that is so crucial to period fiction. Sadly, she cannot. The historical details are there but do not envelope the reader, allowing him or her to recreate this lost Berlin in their minds. Instead they remind us of when the tale is set and that is all.

This along with an over emphasis on Vogel and her troubles while Weimar Germany is in its death throes shines the spotlight a little too brightly on one aspect of the tale while the other is barely present.

Ultimately, A TRACE OF SMOKE is weak Berlin Noir. It's my hope that the nature of the story will bring readers to Berlin Noir and much better authors who craft it. As for the novel itself, it doesn't hold up too well. It's a thin, mediocre read that might work better with a different audience. This reader was left feeling flat.