A Review of Phillip Kerr's A QUIET FLAME 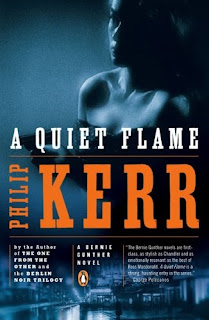 The fifth Bernie Gunter mystery, A QUIET FLAME, picks up where the previous Bernie Gunther novel, THE ONE FROM THE OTHER, left off. In that book, Gunther is forced to ally himself with Nazis fleeing to Argentina and in FLAME we see him setting up in that tropical nest of vipers in 1950. He's got a false identity and is looking for a fresh start and as much peace as a man such as himself could hope for despite the company he's forced to keep. 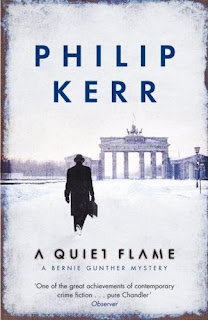 However Gunther is not going quietly into that good night. Posing as Dr. Carlos Hauser, he soon comes under the attention of Argentinean dictator Juan Perón and his wife Evita who seek his perceived medical skills. Gunther has no choice but to reveal his real identity, which presents its own problem. Turns out the Buenos Aires police have a problem as well: a dead girl. The case bears striking similarities to one Gunther investigated in Berlin back in 1932. Given that so many Nazis have fled Germany to hide in South America, the idea is that the murderer who eluded Gunther in the 30s may be alive and well in Argentina like so many of his ilk. And so Gunther is back in harness and, oh, he's got cancer, too. 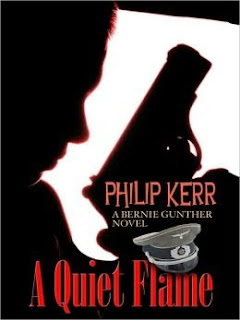 From here the novel moves back in forth between Berlin 1932 and Buenos Aires 1950 as Gunther tries to put the threads of both cases together. In the process we're treated to Kerr's uncanny eye for immersive, period detail, spot-on characterization and Gunther's ever-present and welcome cynical philosophizing. All of this makes for a great read, providing a window into the past. You start sweating as soon as Gunther steps off the boat into the tropical heat of Argentina. The Berlin sections are comparatively short but effortlessly drop you into the volatile time period as the Nazis are poised to seize power. My only knock is that the plot suffers slightly with all of these trappings and, ultimately, can't measure up to the skill Kerr has used to resurrect the past and how enjoyable it is for the reader to revisit this insidious, yet, endlessly fascinating time. A love interest with a case is thrown at Bernie to spice things up and is one of the better Gunther relationships in the series. Her case revolves around her missing relatives and points at a sinister chapter from the period.

In the final analysis, A QUIET FLAME comes in as a somewhat average Bernie Gunther novel. And that's not a knock in any way when you consider how fantastic the series has been and continues to be. It's a novel well worth your time even though the plot is not quite up to snuff. There's more than enough going on in the book to keep you hooked and Kerr's writing ability will have you turning the pages as fast as you can. It's not a break-neck thriller, the action is sparse but worthy, the overall effect is a well-written novel that still rises above a lot of what's out there these days.