A Review of David R. Gillham's CITY OF WOMEN 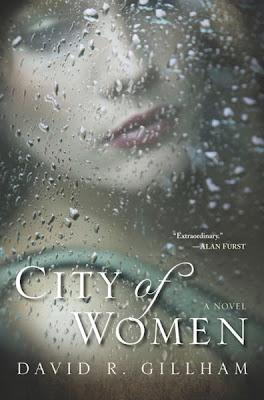 Every now and then a great book comes along that suffers from an extreme case of cover-itis. Case in point, David R. Gillham's CITY OF WOMEN. Examining the cover on the left, there's really not much to be learned as to what the novel is about. At first glance, it looks like a non-descript romance novel, plain and simple. There's no way to know when or where the book is set and there's certainly nothing to indicate that the novel is Berlin Noir. More importantly, there is nothing  that signifies the historical happenings it references. And that last bit is the real tragedy.

CITY OF WOMEN is no pot-boiler. It becomes a frantic page-turner at the end, but, starting out the novel takes its time and the reader benefits from this. Gillham matches Philip Kerr at his best when it comes to recreating the city of Berlin. As we are introduced to Sigrid, a German woman in a loveless marriage, and her world, we are slowly immersed in the Berlin of 1943. The city springs up around us with all its grime and oppressiveness as the women left at home struggle to survive while their sons, husbands and brothers go off to be butchered. 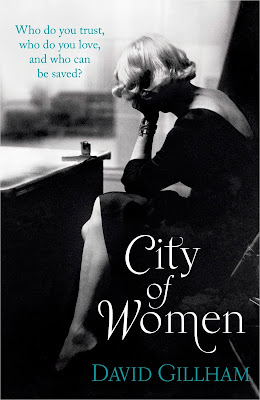 The plot itself is deceptive. Sigrid has had an affair with a Jewish man who is in hiding from the Gestapo. The affair is over but the memories linger and it's easy for the reader to begin believing that CITY OF WOMEN will be an intense character study of love found and love lost. It is, and it's an extraordinary one. But the novel has some big tricks up its sleeve. Pining for the past in a movie theater one evening, Sigrid is met by a breathless girl who has found work in the building Sigrid lives in. The girl is hiding from the Gestapo and needs Sigrid to cover for her when they are confronted. Sigrid does so but the girl, Ericha, won't tell her what it's all about. From here the novel returns to Sigrid moving zombie-like through her life with her mother-in-law and the increasing frequency of the RAF's bombing campaign of the city. A pregnant SS women moves into the building after the previous occupant commits suicide in the wake of being denounced. Sigrid finds a new lover and things continue on.

Until the novel takes the first of many unexpected turns and the tension ratchets up. Sigrid soon learns that Ericha is involved with an underground railroad protecting and assisting Jews and others hunted by the Gestapo. Plagued by her conscience, Sigrid joins this group and readers are treated to a riveting read as the novel suddenly explodes into action. Twist, turns, double-crosses, close shaves and melancholy abound in what is one of the best historical novels I've had the pleasure to read.

I say this not only because of the plot that keeps you guessing right up until the end, but also because Gillham's incredibly vivid characterizations go hand in hand with his recreation of the looks and feel of war-torn Berlin. The main characters come across as three-dimensional human beings with complex motivations. There are good people doing the right thing for both the right and wrong reasons. You have bad people doing likewise. Nothing is cut and dried, black and white in this complex and accurate depiction of what motivates us as human beings. Taken altogether, CITY OF WOMEN has it all. 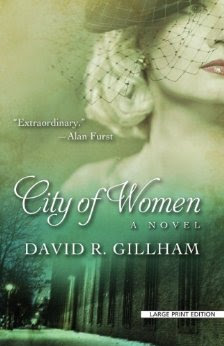 But the book is not quite done yet. The novel also sheds light on an aspect of life under Nazism that the average reader may not be aware of. The railroad depicted in the novel existed. Hundreds of Berliners, "Good Germans", risked their lives to save those considered "undesirable" by the government. They could not look away any longer and put their lives on the line to do something to fight the regime. Research has shown that by the end of the war, there were more Jews still alive in Berlin than any city in Germany. This fact has been lost in the mists of time as the occupying forces too easily (and who can blame them then?) tarred all Germans with the same brush.

CITY OF WOMEN shines the spotlight on the forgotten heroism of those Berliners and does it with style, skill and sheer storytelling. The novel is one of the best Berlin Noir books I've had the pleasure to read and I hope readers will seek it out. HBO could do wonders with the book should they ever choose to adapt it. The tale will keep you in your seat and keep you reading. Bravo, Mr. Gillham!