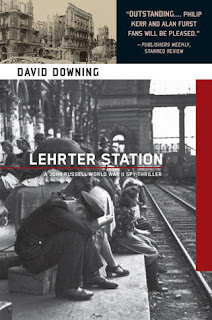 Here at Berlin Noir Reviews, we are pleased to be reviewing David Downing's Lehrter Station. Not because the novel is a great read but because it is the last Berlin Noir offering from Downing we will have to review. We hope.

For the record this is the fifth installment of six in Downing's John Russell series. Here we find journalist Russell living in England with his fiancé, German film actress Effi. The war's over and they are breathing easy. Until the Soviets coerce Russell to work for them (again) and the Americans get wind of it (again) and Russell is forced to work for both of them (again) while trying to get out from under (again). Once back in Berlin, Effi gets involved with what's left of the German film industry (again) and the novel is split between these two storylines (again) as she tries to find the mother of a Jewish girl she helped during the war.

Yes, Lehrter Station is indistinguishable from the rest of the series. Same plot, same glacial pace, same load of talk and endless description. Not much happens in Downing novels. Oh, there's a quick build up at the end and a tacked on climax the reader has long since stopped caring about. But in this novel, Downing decides to fill the pages with a parade of characters from the previous novels who all come in have their say then leave or die before the novel jumps to the next cameo.

Russell learns about the Jewish refugees heading to Palestine, the black market, hiding Nazis, corrupt and inept occupiers and how tough it is to recapture pre-war Berlin in the rubble all while gathering information the US has compiled about the German Communist Party and handing it over to the Soviets.

To his credit, Downing captures the wide landscape of post-war Berlin and has clearly done his research before attempting to capture the chaotic time following the end of the war. But this is not a history book. It's a novel. And as a piece of entertainment, it's flat out boring as hell. Hard to believe that such a rich historical landscape could be rendered uninteresting but Downing pulls it off. The main problem here, as can be seen at the start of this review, is that the plot of Lehrter Station is as recycled as the hook in the titles of the other Russell books. Same plot, different era. Downing proves that if you've read one you've read them all. In the Russell series, only the dates and places change. 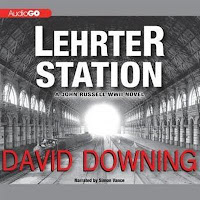 With a heartfelt sigh of relief, Berlin Noir Reviews says goodbye to David Downing and the John Russell series.