TANGLED UP IN BLUE

Bernie Gunther's back - and for Berlin Noir fans that's good news! The most recent installments of the series have been a tad hit or miss and I'm pleased to announce that Prussian Blue hits the bullseye. 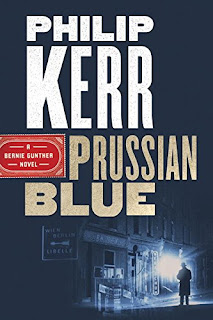 Following the usual routine, the novel is split in two, telling us tales set in 1939 - on the eve of World War Two and 1956 - as Bernie is hiding out in France. This is not a structure I care for particularly but the Gunther series is the exception to the rule and makes it work by having Gunther revisit the '39 territory in the '56 tale and the weight those heavy years have played on him are shown to good effect.

But let's not get ahead of ourselves. What's the darn book about? 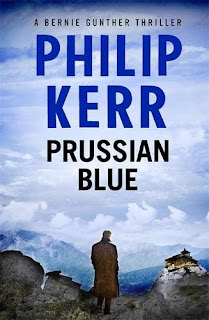 It begins in 1956. The summer season is drawing to a close andFrench Riviera is about to end. He quickly falls afoul of Erich Mielke, now working in the GDR government with the Soviets in East Germany. Mielke has a simple task for Gunther: murder Anne French, the woman who got the better of Gunther in the last novel - The Other Side of Silence. And he's certainly given a choice: commit the murder or die a slow, agonizing death. Knowing full well that Mielke will do away with him whether he completes the mission or not, Gunther must go on the run with Stasi agents hot on his heels.
Gunther's hotel job on the 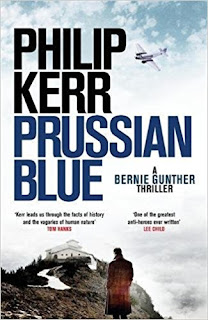 During a brief moment of down time while on the run, Gunther is drawn back to the assignment Reinhard Heydrich forced him to take in 1939 and a trip to Hitler's retreat at Berchtesgaden. A man has been shot with a sniper rifle on the balcony and that's just a little too close for Martin Bormann who is overseeing the preparations for Hitler's return to celebrate his 50th birthday.  Thus Gunther is presented with another simple choice: solve the case in one week or suffer the consequences. And there's nowhere in Nazi Germany to run this time.

And we're off. With the majority of the novel set in 1939 and the intriguing murder investigation, the flash "forwards" to 1956 are also compelling. The noose tightening around Gunther's neck while on the run makes for great reading. 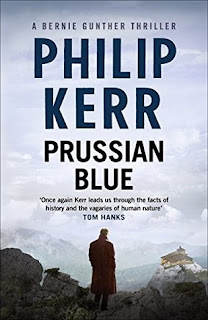 The result is a chase tale and police procedural at the same Hitler's retreat at Berchesgarden and the surrounding area, you'll know it like the back of your hand by the time you reach the last page. The plotting is also much leaner. There's no romance for Bernie this time out, which is a good thing. Sure, women throwing themselves at the hero is a staple of the genre but, being overplayed as it is, it's tough to bring anything new to the table. Having Gunther focusing on solving a murder to stay alive and on the run for the same reason, leaves little room for bedroom antics. The result is a lean, mean, Nazi-bashing machine. Prussian Blue, though 500+  pages, gets the job done quickly and efficiently and never bogs down. It starts quick and barrels along to a satisfying conclusion.
time. Kerr's writing is always a cut above the norm and his research has rooted out the telling period detail to place the reader firmly back in those turbulent years. If you were unfamiliar with 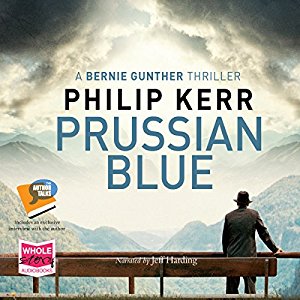 My one knock against the book is that Gunther, being a policeman of extraordinary experience, should be a little better at being on the run. He occasionally makes it far too easy for the Stasi to find him. Perhaps this goes with his cynicism and fatalistic approach to life and this stage of the game. Or maybe they occur to make the writer's life easier. Only Kerr can say.
Prussian Blue is a great read! Kerr has stumbled recently with The Lady From Zagreb in this reader's opinion but has regained his form with The Other Side of Silence and this new, kind of sequel. You want action? Prussian Blue's got it. You want intrigue? Look no further. Kerr has carved out a worthy legacy with the Bernie Gunther series and Prussian Blue is a significant entry. It's a fine read. Don't miss it!