A Review of Philip Kerr's THE OTHER SIDE OF SILENCE 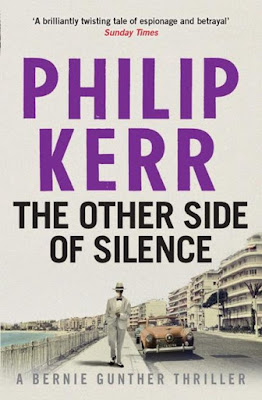 Bernie Gunther is back for more misery and melancholy in THE OTHER SIDE OF SILENCE. This is our 11th go-round with the bitter former detective and, while not a refreshing take on the character and his shadowy world, the novel is a great addition to the canon.

The previous installment, THE LADY FROM ZAGREB, was a disappointment for this long-time reader of the series and so I approached the new one with a hint of trepidation. Was the series starting to show its age? Had we seen enough of Bernie Gunther and his ocean of troubles?

THE OTHER SIDE OF SILENCE opens with Gunther's recounting of his attempt to commit suicide - an attempt foiled by circumstance and not by any action of Bernie's. So, yeah, he's not in a good place from the outset. He's seen too much horror, his wife has left him and, working as a concierge in the Grand Hotel  on the French Riviera in 1956 just isn't doing it for him anymore. Throw in the arrival of an ex-Nazi Gunther hates and a heavy dose of carbon monoxide seems like a good idea.

Avoiding death by pure chance, Gunther decides to soldier on a 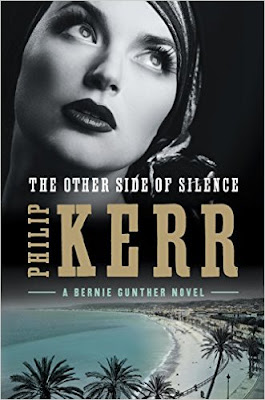 little longer. Another guest, Anne French, a beautiful writer desperate to meet W. Somerset Maugham and a bridge game here and there are about to get Gunther into heaps of trouble.

Maugham, a homosexual, is being blackmailed and has asked Bernie Gunther specifically to see to the delivery of payment for a compromising photograph. Maugham and Gunther hit it off (hey, Gunther always gets along in his Forest Gump moments) and, reluctantly agrees to convey the payoff, especially when he learns that the blackmailer is the ex-Nazi he spotted earlier.

Before you know it, Gunther is mixed up in something a lot bigger than a potentially damaging photograph. Maugham, who actually was a spy in his younger days, has embroiled Gunther in a web of international intrigue. Bernie, of course, has fallen in lust (is he capable of love at this point?) with the fetching Anne French. The pot is ready to boil and when it does, all hell breaks loose.

Gunther fans can see that THE OTHER SIDE OF SILENCE belongs with the other books in the canon dealing with Gunther's later years, long after the war. As with the other entries, there is a lengthy flashback to Barlin and Konigsberg and we learn the details of Gunther's life in 1945 that are captivating. No spoilers. As good as the flashbacks are, the novel could have worked just as well without them. Don't get me wrong, I'm glad they are in the book because they are written with Kerr's usual brilliance in evoking the past. It is, rather, that the connection to the current tale is tenuous at beast even with the involvement of the ex-Nazi in both sections. 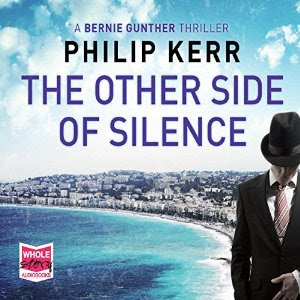 Overall, this is a compelling read. THE LADY FROM ZAGREB was an off-speed pitch, more love story than adventure of detective novel and this switch in emphasis reduced the mystery/detection/historical elements to a point of transparency. The balance is much, much better in THE OTHER SIDE OF SILENCE. I found all of the plotlines interesting and there's always enough going on to keep the pages turning. Never dull, the plot cracks along and the ending might set the record for the longest sustained lies in the history of fiction. Yes, the climax comes with a flurry of words, not bullets, but you won't mind because the novel will have sucked you in at this point.

Bernie Gunther will return in PRUSSIAN BLUE most likely in the spring of 2017. Until then, THE OTHER SIDE OF SILENCE returns Kerr to the top of the Berlin Noir heap. It's a great you don't want to miss.