GIVE PEACE A CHANCE 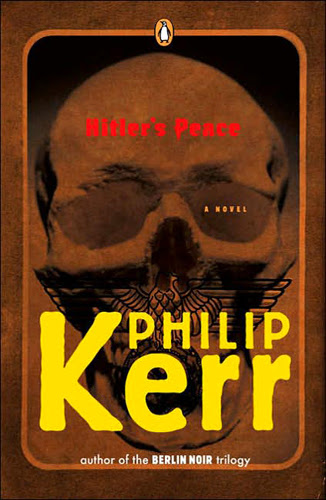 For the last review of 2013 (see Program Note below), I thought it would be fun to do something a little bit different. HITLER'S PEACE by Philip Kerr is not, technically, Berlin Noir though there are chapters set in the German capital, which means it kind of qualifies. This is something of a 'lost' novel as it languishes in the shadow of Kerr's excellent Bernie Gunther series, a fate it, to some extent, deserves but the novel is not without its merits. Read on.

HITLER'S PEACE is a sprawling tale set against a canvas as wide as the globe. The year is 1943 and the war rages on. Enter Professor of Philosophy Willard Mayer who is at the White House for a very important meeting. Yes, he is waiting to meet with FDR. Over the course of that meeting, Mayer, who works for the OSS in a minor capacity, is asked to do a routine report to determine the veracity (or falsity) of claims made by the Nazis that the Soviet Union massacred more than 4000 officers and men in the Katyn Forest near Smolensk. The event and location will be familiar to Gunther fans from the recently released A MAN WITHOUT BREATH. This plays out as world leaders, including Himmler and other high-ranking Nazis, are engaged in secret peace talks to bring the war to an end. The Nazis, faced with the reality that the war is lost but burdened with FDR's demand for unconditional surrender, are desperate to save what they can of their empire by any means necessary. Those means also include Operation Long Jump - a bold plan to infiltrate Abwehr agents into the conference and then bomb the Big Three when they gather for Churchill's birthday party.

Big games for big stakes. That's what marks HITLER'S PEACE. Kerr is not fooling around here. With so much going on, the story jumps around from Washington, Berlin, Posen in Poland, London, Cairo, the Ukraine, Iran and the Atlantic Ocean and, of course, the conference itself in Teheran. As I said above, this novel gets around. Kerr does an excellent job of re-creating these places for the reader and his immersive details are well showcased here. That said, the case could be made that Kerr also bites off more than he can chew. The novel lacks focus with all of this jumping around and an interesting plot becomes the proverbial needle in a haystack.

Mayer investigates the Katyn report. He pines for an loses his girlfriend while engaging in infidelities. He's framed for murder, suspects Nazis spies around FDR and gets into a dust up or two. And he just might be arrested as a traitor. Interesting stuff, but Mayer is an anti-hero and not in the same class as Kerr's more famous creation. You don't root for him. In fact, Kerr goes out of his way to ensure you dislike him thus rendering the Guntherian tangles Kerr places Mayer in a little less riveting especially set against the backdrop of world peace hanging in the balance. 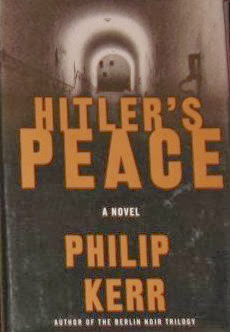 The novel does have its moments though. Aside from Mayer's tangles, there's a murder aboard a Navy vessel, the Abwehr agents preparing their mission, and some nice surprises at the conference itself. Kerr also keeps the action moving though the book, at times, reads more like the summary of a series of books than a single cohesive story.

I think that HITLER'S PEACE is worth your time. It's not classic Kerr, it doesn't come anywhere near the Gunther books, but it's a read that, ultimately, will be worth your time. It's not Kerr's a-game but his b-game is no slouch. While you're waiting for the next Gunther book to be released, you could do a lot worse than HITLER'S PEACE to while away the time. Put this one down as a few steps above average. Not a home run, but a solid bit of hitting regardless.

The review of HITLER'S PEACE will be the last review of the year. What a year it's been! And we're not going anywhere! The thinking here is that the holiday season is upon us and things tend to get busy for us all no matter what our connection to Christmas. With that in mind, I thought it would be a good idea to put the reviews on hold until things settled down in January and we've all caught our breath. So, worry not, there will be more reviews in 2014.

I started BERLIN NOIR REVIEWS to shine the spotlight on this great mystery sub-genre that has gone beyond Philip Kerr's incredible Bernie Gunther series and, at first, didn't think there was enough stuff out there to keep the blog going. Boy, was I wrong! Looking over the year's reviews, it's clear that plenty of writers have taken up the challenge of recreating Berlin before, during and after the war. I love this stuff. Sure, the reviews, sometimes, don't reflect that, but it's true. I never crack a Berlin Noir book with any feeling other than excitement.

And the excitement continues! With more than 5000 visits to the blog since it began, I am amazed and stunned to say nothing of bursting with gratitude for everyone who has dropped by to read the reviews. If I haven't reviewed your favorite Berlin Noir book, worry not. I'll get to them all eventually.

So thanks for a great year, folks! I hope everyone has a great holiday. Get rested and charged up for the new year! Berlin Noir Reviews will see you in January, 2014! Happy Holidays!